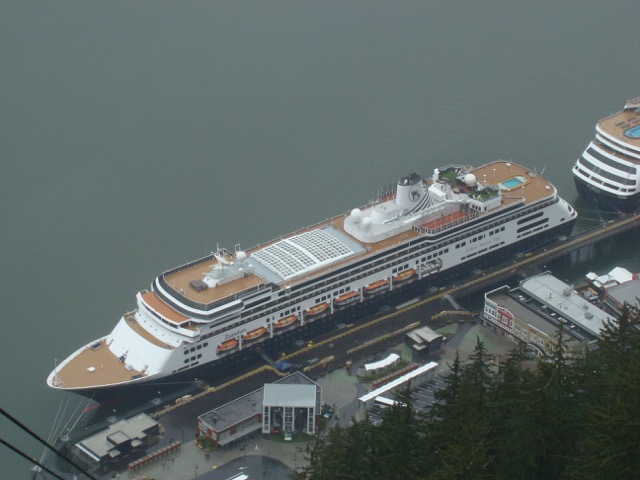 Other than the Outdoor Walk Around on the lower Promenade Deck, my next favorite place to be was the Lido Deck. Breakfast and lunch were served there (there’s plenty to eat onboard—you’ll need that walk), but more than that, I liked the windows surrounding both sides of the dining area. Plus there was a covered dining area beside the pool, also surrounded by windows.

The Sea View Pool, a second pool aft with deck chairs provided a great view of where the ship had been. If it was too windy or made me seasick to look that direction, I sat near the windows in the Lido Deck dining room.

Travel Tip
Every cabin was given a map of the ship. This was helpful—not only for finding our way back to the lifeboats if we needed to do so, but also for finding everything else on board.

Study the ship’s map and carry it with you until you’re familiar with your surroundings. I’m embarrassed to say that the first time I cruised I wouldn’t have been able to find my assigned lifeboat if my life depended on it.

The only problem? Most of the amenities we wanted were in the stern. We were always going the wrong way. Silly land lovers. Oh well, we got more exercise that way.

By the way, a pier head jump is making a ship as it’s just about to sail. This would be difficult for most of us to do on any ship, but near impossible on a cruise ship.