We boarded a modified school bus painted tarp beige for our Tundra Wilderness tour of Denali National Park. The big five animals to see at Denali are:
• Grizzly Bears
• Dall Sheep
• Moose
• Gray Wolves
• Caribou
Everyone on our bus hoped to see them all. The bus-tour-driver-guide instructed, “If you see an animal before I do yell, ‘STOP the bus!’ I won’t stop if you only holler the name of the animal. For all I know you might just be talking about what you hope to see and not about what you actually see.”

Families with several children were aboard with us. Even though they sat in the back of the bus, their eagle eyes usually spotted the animals before the rest of us. At the eagerly anticipated sighting of our first animal, the children yelled, “Caribou! Caribou! Stop the bus!”

The driver slid to a stop. Cameras clicked. People oohed and ahhed. Smiles all around.

As we scanned the brush for other animals, all we saw were more caribou. Our excitement waned. Comments turned to, “Oh. Another caribou.”

I think the road hog in the featured photo above was determined to get his photo taken even if he was the tenth caribou we saw.

We worried that we weren’t going to see anything except caribou, but then we saw our first grizzly bear.

See that creamy object in the photo above? That’s the grizzly. Notice the tell-tale hump of his shoulders.

While our cameras clicked and whirred he continued grazing on the berry bushes. He had more important business than posing for us. In fact, he rudely turned his tail end several times.

We were never in any danger from the grizzlies. However, our driver did need to watch out for multiple other tour buses coming down from the mountain. The mostly dirt park roads were originally constructed earlier in the past century. A few places were barely wide enough for one bus and much too narrow for two buses to pass each other. As we drove along the edge of a precipice I wondered how we’d share the road at such a spot.

Our driver slammed on his brakes as another bus barreled toward us around a steep curve. Thank goodness he had time to swerve against the hillside of the road and not the drop off on the cliff side. 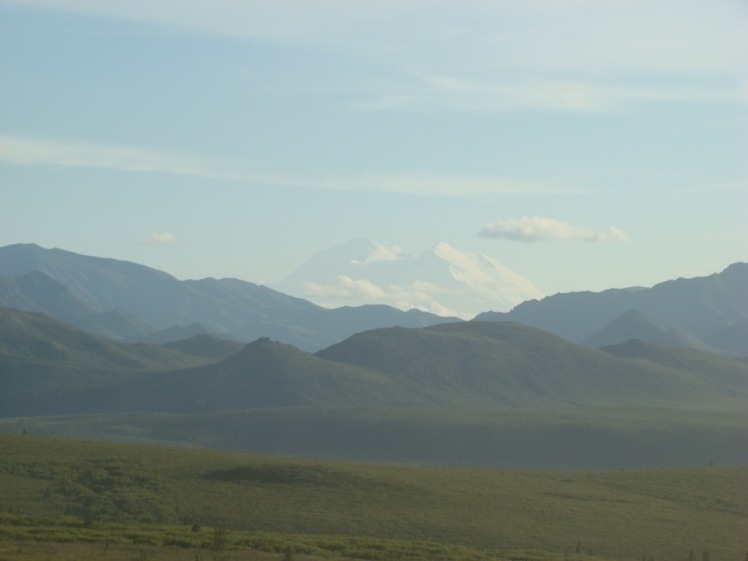 In the photo above the ghostly form of Denali Mountain (alias Mt. McKinley) can be seen through the evening haze.

On our descent we glimpsed white dots near the top of one ridge—Dall Sheep—much too far away for our camera. We also saw more grizzly bears—a total of five. 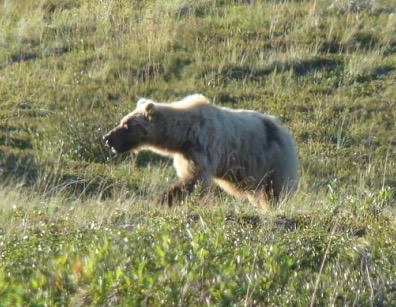 For a moment we thought the young caribou in the photo below would be caribou steak for this grizzly’s supper. 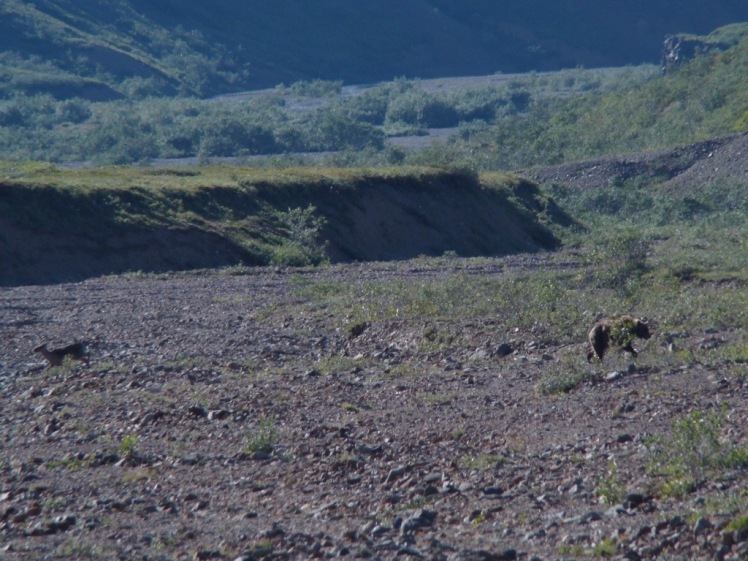 Personally, I was relieved when the bear decided it was too much trouble to chase the caribou. He turned aside to the bushes full of berries all around him—easy pickins’. He also preferred a good scratch instead of the chase. He scratched for several minutes while the caribou walked away. (Photo below)

The land was quite flat near the river basin. I asked our driver if we might see any moose. He shook his head. “If there are any to see, our chance is coming up shortly.”

Boom! No sooner had he finished speaking than there it was.

You’d think such an ungainly looking animal wouldn’t be able to move fast. You’d be wrong. As our bus turned round a bend we startled a big one enjoying an evening drink in a swampy roadside pool.

One of the kids in the back of the bus hollered, “Moose! I mean, STOP!”

All I saw was its hind end as it disappeared into the dense brush. No time to even lift a camera.

You’ll enjoy the sights in Denali and you may even enjoy the friendly banter of your driver-guide. We eventually came upon this pair of moose grazing quietly. (Photo below)

The female seemed intent on staying near the big male. While she grazed, she lifted her head frequently to keep an eye on the bull. When he moved, she followed. Our driver called her a “Shameless flirt.”

Travel Tips
• Many of the animals were fairly close to the bus, but a zoom lens of at least 200mm would have brought them even closer. As for the Dall Sheep sighting, only the wildlife photographer on board with his professional equipment had a chance of capturing more than blurry white dots on the mountain slope.

• Keep your camera up and ready. Don’t turn off the power to save your battery. You’ll be sorry the minute you shut it off.

• Bring an extra battery (or two) for your camera and always keep your spare(s) charged. Charge your batteries in your room the night before your tour.

• On some portions of the tour, your driver-guide may have an opportunity to park and shoot film of the animals. His equipment brings them in much closer (you can watch on an overhead while in the bus). Copies of the film are available for purchase. Ask your guide for specific details.

Travel Light Humor
Keep in mind, the animals aren’t hiding behind the bushes waiting to jump out for a busload of tourists. The guide doesn’t have a button to push for instant pop-o-matic animals, but you’ll probably enjoy the tour anyway.