Did you know German soldiers made it to Kansas during World War II?

Actually, they were transported to prisoner of war camps throughout the United States, not just Kansas. In fact, almost every state had at least one camp. Reports of the exact number vary. In the 1950s the National Archives threw away many POW camp records, but there were several hundred.

My husband and I visited the Camp Concordia POW Museum in Concordia, Kansas.

Four thousand German POWs were housed at this location. Rules of the Geneva Convention were strictly enforced. Our American soldiers who guarded the prisoners had the same type of housing and ate the same food as the prisoners.

The food was adequate and plentiful, but one of the guards described the housing as, “tar paper shacks just like what the prisoners had.” (Other sources debate his analysis.)

We stood around a detailed model of the camp as our tour guide pointed out the camp’s layout. A small area caught my attention. “They had a cemetery?” I asked.

Our guide explained. “The original camp commander was somewhat lax in discipline. He had allowed the highest-ranking German officers to have charge of the POW area of the camp. Then a suicide occurred.

“It didn’t make sense. The men were being treated well.

“After five more prisoners committed suicide it was obvious something else was going on.

“A new camp commander was assigned. He quickly brought order and investigated the deaths. It was determined that Nazi leaders were behind the suicides.

“If German prisoners expressed anti-Nazi or pro-American sentiments, the Nazi thugs threatened retaliation against the men’s families in Germany after the war. The men were given rope and left in a room alone.

“Eventually the Americans weeded out the fanatics and transferred them to a high security facility. Things calmed down after that.”

One goal of the camp was to educate the prisoners. Classes were held in many subjects. It was hoped that these German men (many held high positions before the war) would carry the ideals of democracy back to their country and eliminate totalitarian rule. This was a very wise and effective plan. Germany became a democracy and has been one of America’s allies for many years. 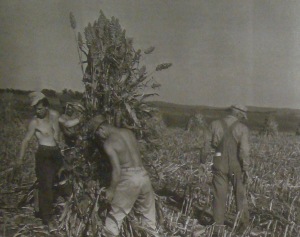 Not all the townspeople were happy about the presence of German prisoners in their community, but there was an economic benefit. With so many local young men gone to war the prisoners worked on road repair and filled other vacant jobs.

POWs served as farm labor in the area around Concordia. Some were German farm boys who wanted nothing more than to go back to their own farms and never see war again.

When I was a child I heard stories from older adults about these young men. They were polite hard workers. Friendships were formed between them and the farm families they worked for.

One young man returned from Germany and married the farmer’s daughter. He raised two sons and eventually inherited the farm. His sons still own it.

When the camp closed, most of the buildings were moved to town and turned into homes or dismantled and used for other building projects. A farmer owns the land with the one remaining guard tower and a portion of the concrete water tower presides over the middle of his cornfield. It helps give some perspective as to how large the camp was.

Only one other building remains on the camp’s original location—the American Officer’s Club. Our tour guide said, “It’s like stepping back into 1945 when you enter it.”

The museum hopes to acquire the officer’s club in the future when adequate funds can be raised.

Travel Tips
Tours are by appointment. Contact the Cloud County Historical Museum to arrange a tour, 785-243-2866. (The entire east side of the Cloud Co. museum is covered with a Whole Wall Brick Mural–very  distinctive. You can’t miss it. They’ll give you directions to the former POW camp.)

If you visit Camp Concordia’s museum in summer, arrange a morning tour. Only one room of the museum is air-conditioned.

Entrance is free. However, please consider a generous donation or purchase the book: Camp Concordia. The museum is funded strictly by donations and is run by volunteers.

When you take the tour, be sure to ask your guide about the time a guard was accidentally knocked out. What did the POWs do with his gun?

Sign the guest book at the guard tower. The farmer keeps track of visitors.

In 1995 a committee formed to commemorate the fifty-year anniversary of Camp Concordia’s closing. Fourteen former prisoners came from Germany and at least as many American guards.

One of the German men told a former guard, “The best two years of my life were here in Concordia, Kansas.”

Thank goodness the committee realized they needed to preserve what remained of the camp so the stories would survive.

I’m all for the preservation of stories.

6 thoughts on “Enemy Soldiers in America”