We often take a brief road trip to enjoy the changing colors of autumn. This year we only had twenty-four hours. We chose to head southwest through Kansas on diagonal Interstate 35.

Along the way we noted the sunflowers had finished blooming. Ragweed’s golden poison was fading, too.

I’m certain I heard all the allergy sufferers shout in unison. “Thank goodness!”

The farther south we traveled, the more colors had already changed. Red and yellow sumac bushes dotted the roadside.

Tall cottonwoods and other trees with yellow and golden leaves shimmering in the sun—announced they were members of the poplar family. Tucked within the hills bleached bones of sycamores stood out in stark contrast to the dark bark of the surrounding woods.

Orange and red poison ivy wound around a few trees. Some of them still fought valiantly for life against the ivy’s chokehold, while others had surrendered to death. Strange how some colors give us delight, while others announce danger.

Some of the prairie grass beside the road was changing. Wherever the sun shone behind them, their edges glowed orange. However, they’d only just begun to turn. Their most beautiful colors will appear in late October or in some cases, November.

Pockets of late purple wild flowers surprised us when they interrupted the color scheme. 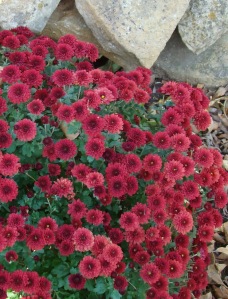 At Emporia we left Interstate 35 and took U.S. Highway 50. Mums of various colors decorated farm yards. We connected with State Highway 61 on the southwest side of Hutchinson.

We paused at the tiny town of Arlington beside 61 highway. Carolyn’s Essenhaus (Eating House) has the “Best Pie Around.” Carolyn is a wonderful Mennonite lady and a great cook.

We had passed green fields where the winter wheat was several inches tall as it should be by this time of year. However, they had more rain than usual around Arlington during August and September. Many fields had been too wet to drill the wheat until recently.

The wind was fierce, as we turned northeast for the return trip. We passed farmers drilling (planting wheat) in several areas. Good brown dirt blew around them.

Flocks of starlings huddled behind large highway signs to keep out of the wind. Feathery russet-colored tall prairie grass waved wildly while the cattails bent double before the gale.

In fact, a cloud of dust approached us on the northern horizon. We turned east to avoid it.

We were in such a hurry this trip that we only stopped twice for photos—once at a field of large round hay bales. Then we raced the sunset as we traveled northeast on the Kansas Turnpike (a toll road) through the Flint Hills.

We knew that dust cloud would make an interesting sunset. We took our second shot at the Bazaar Cattle pens (a scenic overlook). The dust cloud is on the right side of the photo.

With its vast expanses, fall in Kansas may be a more subtle beauty than you’re used to viewing. However, it is those wide-open places that allow our eyes space to take in the panorama of its unique beauty.

Travel Tips:
• If your travel plans take you as far southwest as Hutchinson, Kansas it’s worth your time to drive to Carolyn’s Essenhaus in Arlington for a meal or a piece of pie. (Sour cream raisin is very popular, but so are fruit pies. My kids prefer her chocolate peanut butter pie.) Follow Carolyn’s on Facebook for daily specials.  This is not a fancy place, it’s a place for good food among plain good folk.

• If you don’t have time for a meal or dessert, at least buy some baked goods from Carolyn. We purchased several loaves of light wheat bread, coffee cake, and raspberry white chocolate scones.