On our fall foliage tour of New England we visited the Lexington and Concord areas where the Revolutionary War began. A local guide took us first to the Lexington Battle Green. 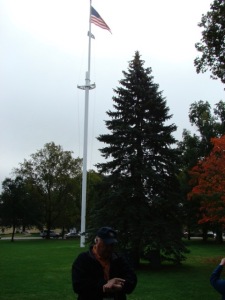 By 5:00 a.m., 75-80 minutemen (20 of them teenagers) lined the road. A brief but bloody skirmish on Lexington Green left eight of the Colonists dead. The Lexington Green is preserved as hallowed ground in honor of what happened that day.

Major John Buttrick (an elected officer) led the minutemen of the Concord militia. They were already lined up on the high ground when the British arrived at the Old North Bridge at 9:30 a.m. The Brits fired first, but the Americans fired back.

Colonists from six surrounding towns poured into the battle. The British raced back to Boston with the Americans chasing them and setting up ambushes. From 12:30 – 7:00 p.m. fighting erupted all along the “Battle Road” as nearly 4,000 Colonists unleashed “an incessant fire” on the British Regulars. The red coats fought a rear guard action, circling around with flanking maneuvers.

At the end of the day, the Colonists surrounded and laid siege to Boston. The Revolutionary War had begun. 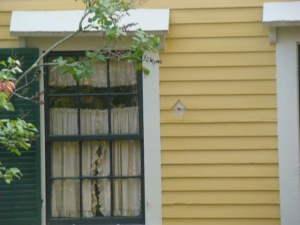 Travel Light Humor:
When the British marched into Concord, everyone in the village was supposed to keep their shutters closed. However, a young girl wanted to see those pretty red coats so she opened a shutter. The British were worried about snipers. A bullet hole remains in the side of the house (see diamond-shaped cut-out beside the window). Apparently she closed the shutter afterward. 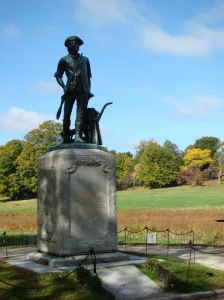 Today, Tuesday, November 8th is the day of our national election. This Friday, November 11th is Veteran’s Day. Let’s honor all our veterans, past and present, by exercising our rights as citizens to vote.

Travel to your polling place and cast your ballot today.

If we don’t continue to exercise our voting privileges as citizens, we may lose them. What a sad thing it would be to throw away what others have fought and paid for so dearly.