The trees wore their formal fall gowns of gold, orange, and red along the New Hampshire highway into the White Mountain National Forest. However, the clouds lowered upon our arrival at the cog railway station. We couldn’t see past the first hill for our trip to the top of New England.

This three-mile route to the summit of Mt. Washington is the world’s first mountain climbing cog railway and the second steepest track in the world. (The cogwheel railway on Mt. Pilatus, Switzerland claims to be the steepest.)

On board the railway car we enjoyed the company of fellow passengers from all over the United States and Canada—a good thing too, since we shared each others company for 45 minutes.

A cog railroad may be the safest way up a steep slope, but it’s definitely not the fastest. We also spent time pulled onto the side track while we waited for another train to descend the mountain.

Near the summit of Mt. Washington our train climbed above the clouds. At the top of the mountain we had plenty of time for rock climbing, photos, a visit to their gift shop and lower level museum, as well as watching the trains arrive and depart.

Inside out of the wind, I enjoyed a wonderful cup of hot chocolate at the snack bar. (In retrospect it probably was an average cup, but my gratitude for its warmth increased my enjoyment of the flavor.)

In the museum we viewed footage of the winter weather on Mt. Washington. It was easy to see why this mountain is used as an experimental weather station. After watching how quickly ice formed on everything in that howling wind, I was nearly cold enough for another cup of that hot chocolate.

Brrr! Mt. Washington is not a place I’d want to be in the winter. Click here to view current Mt. Washington Weather conditions. Or search the site for other information. 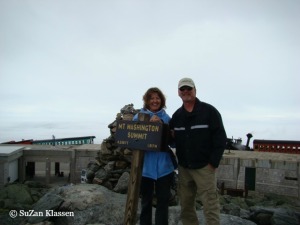 To document their arrival at the summit everyone decided they had to have their photo taken immediately. If family groups spent a little extra time arranging themselves or took more than one photo, people behind them in line became impatient—lots of dramatic sighs, or posturing with hands on hips and grumpy looks.

An hour later I climbed the rocks past that same all-important sign. No one was there. Made me laugh.

If you find yourself in a similar line—stay calm. You’ll have time to take your photos. Trust me. We spent approximately an hour and a half on the mountaintop before our turn was called to descend.

Travel Tips:
• This train is a tortoise, not a hare. The ascent took approximately 45 minutes.
• Plan to climb some rocks to deal with potential idleness—especially if you have younger children. Wear sturdy shoes suitable for scrambling over rocks.
• Check the weather report before you go, but you’ll probably need a jacket or windbreaker on most fall days. Several people in our party were grateful they’d brought winter coats, hats, and gloves. The temperature wasn’t quite that cold to me, but the wind was awful and weather changes quickly.
• Highest recorded wind speed at the summit: 231 miles per hour
• Make sure you view the video in the museum—amazing footage.

What railroads have you traveled? Tell me about your adventures in the comments section below.
Until next time…Travel Light,
SuZan
© 2016 SuZan Klassen

9 thoughts on “Top of New England”