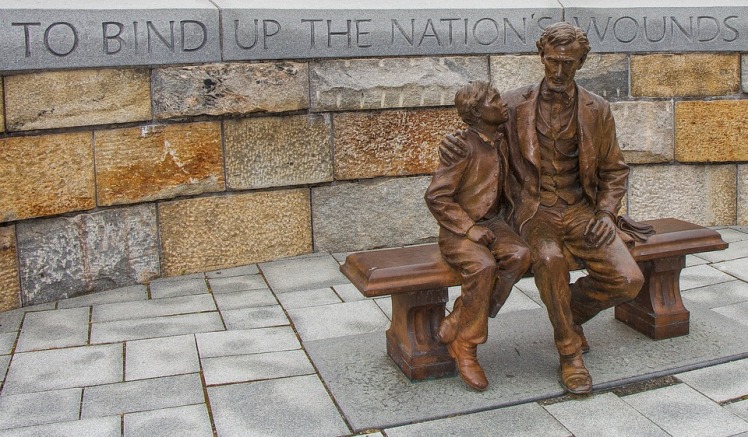 For Presidents’ Day I’ve chosen to honor our 16th president, Abraham Lincoln since he was the closest thing I had to a childhood hero. His wisdom and courage in the face of extremely difficult times has always impressed me.

One of the many reasons I have admired Lincoln are for his wisdom as evidenced when he quoted Jesus: “A house divided against itself cannot stand.”

You can use the links included in this blog post to plan a vacation or historical field trip to coincide with your studies. I’ve provided the links in chronological order beginning with Lincoln’s birthplace.

Lincoln was born on February 12, 1809 at the Sinking Spring Farm. He was the first son of Thomas and Nancy Hanks Lincoln. Their 300-acre farm is near Hodgenville, Kentucky. A cave-fed spring from which the farm derives its name is still visible on the property.

The original one-room cabin has disappeared. However, a replica of the original is housed within a stone memorial building that looks more like a Greek temple than a memorial to a backwoods cabin. You can learn more about the construction of this building at the link and when you visit the site.

In the spring of 1811, when Lincoln was a two-year-old, his family moved “down the road a fur piece” to Knob Creek Farm. This 230-acre farm near Hodgenville, Kentucky is named for the creek running through the land as well as its knob-shaped hills. The National Park Service maintains a reconstructed cabin on the land.

Lincoln wrote in his 1860 autobiography that his earliest recollections were of this place. He and his older sister attended a “Blab School” where students learned by reciting their lessons out loud over and over.

You can imagine the noise level coming from these schools with groups of children all practicing their lessons at the same time. This may have been a beneficial way for some students to learn. Auditory learners need to hear themselves speak out loud.

Disputed land titles led to the family’s next move to Pigeon Creek Farm December 1816 in the wilderness of Spencer County, Indiana. Lincoln’s mother and two other relatives died there from a sudden illness. The next year his father remarried the widow, Sarah Bush Johnston. Her impact on Lincoln as his stepmother cannot be overestimated.

Pigeon Creek Farm and its living history farm is maintained by the National Park Service as the Lincoln Boyhood National Memorial. However, only the foundation of the family’s cabin remains.

The Lincoln family next traveled to central Illinois. March 14, 1830 they erected a homestead 10 miles west of Decatur. This site is known as the Lincoln Trail Homestead. This may have been some of the best farmland, but once again they were prompted to move after illness and an extremely harsh winter. This time was different in one way. Now 22 years old, Lincoln left his father and stepmother to seek his own fortune.

A small state park memorializes the now-vanished homestead south of Route 36. A replica cabin burned down years ago, but the original family cabin once stood high above the Sangamon River. Climb to the top and spend some time contemplating this amazing man who was leader of our country during a trying time of division.

Bring your kids to the New Salem re-constructed Pioneer Village northwest of Springfield, Illinois. Only one building is the original, the Onstot Cooper Shop. All buildings are furnished with period antiques including ones from original settlers. Let your kids enjoy a walk through the woods, too. I’ll bet Lincoln did when he lived there.

Lincoln settled in New Salem after his adventure taking cargo down the Mississippi River. He boarded with various families in the village and took odd jobs while teaching himself grammar and other subjects. Do you think he practiced the “Blab School” method of memorizing?

After a stint in the state militia he studied law, then was elected to the state legislature and spent a few months in the state capital. He even helped move the capital to Springfield and began his legal career there in 1837.

At first he boarded with friends, then stayed in country inns and farmhouses while he traveled the legal circuit covering several counties. He married Mary Todd in November 1842. Eventually they made their home at the corner of Eighth and Jackson Streets. This Lincoln Home in Springfield is the only home that Abe Lincoln ever owned. He and his family lived there until he was elected President.

Many visitors are drawn to the Lincoln home. Get a ticket first at the Visitor Center, then arrive at the house for your scheduled tour. Admission is free, but tickets are issued on a first-come, first-served basis.

On February 11, 1861, Abe Lincoln and his family left for Washington, D.C.  Due to the difficult political climate at the time and evidence of an assassination plot, Lincoln was counseled to arrive secretly in Washington. Newspapers ridiculed him for this. Political cartoons lampooned him.

Various newspapers (the only news media of that day) vied to put the politician they supported in the best light and the opposition’s man in the worst light. If you’ve never heard of this incident it might be a good one to research. I won’t spoil it for you by revealing any more details.

Upon the family’s arrival they stayed in the Willard Hotel, a few blocks east of the White House.

After President Lincoln’s inauguration March 4, 1861, the family lived on the second floor of the White House. However, the family spent the summers of 1862-64 in the Lincoln Cottage on the grounds of what was then the Soldiers’ Home, now it is a military retirement facility.

The location of this cottage gave the family more peace and privacy, yet was close enough for Lincoln to ride by horseback or carriage to work daily.

Advance tickets to visit the cottage are strongly suggested since it is the only way to guarantee your spot on the tour.

After President Lincoln was assassinated his remains plus that of his son were returned together to Illinois in 1865. You can visit the Lincoln Gravesite at Oak Ridge Cemetery in Springfield.

Lincoln rose from abject poverty. He pursued education and wisdom. The following quote says it far better than I ever could. These are the words of Lincoln’s long-time friend, Joshua Speed:

“Now, for me to have lived to see such a man rise from point to point, and from place to place, filling all the places to which he was called with honor and distinction, until he reached the presidency, filling the presidential chair in the most trying time that any ruler ever had, seems to me more like fiction than fact.

“None but a genius like his could have accomplished so much; and none but a government like ours could produce such a man. It gave the young eagle scope for his wings; he tried it, and soared to the top!”

Travel Light Humor
Lincoln apparently continued the “Blab School” method later in life. He annoyed his law partner by reading the newspaper out loud. Abe explained that he “learned better by using two senses.” That sounds like he was an audio/visual learner.

Choose from these 3 ideas and leave your answer in the comments below.
1) Tell me, what is your learning style?
2) Tell me about your trip(s) to Lincoln’s former homes
3) Tell me your favorite Lincoln quote