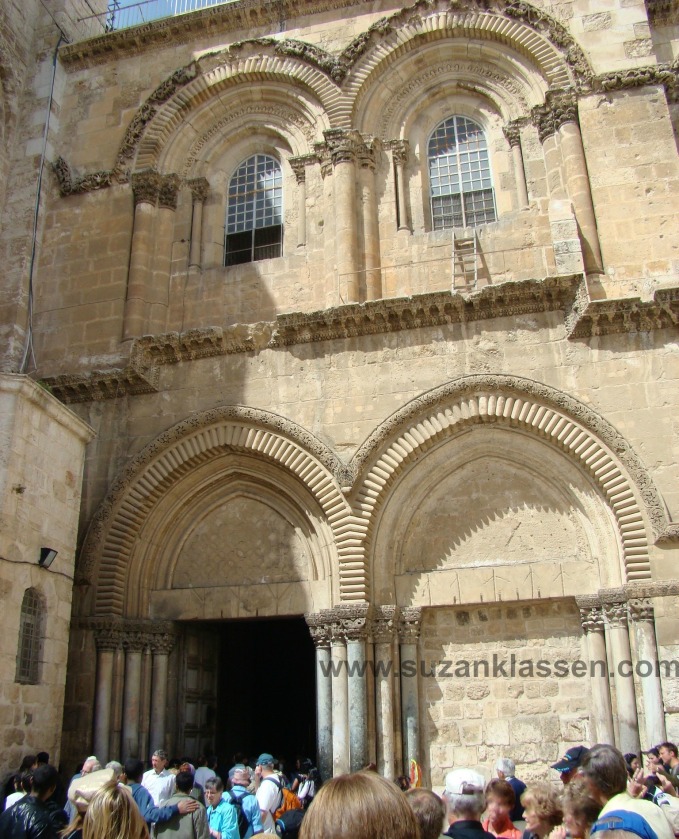 In the 4th Century AD, Emperor Constantine’s mother built the original Church of the Holy Sepulchre in Jerusalem. From that time to the present the Holy Sepulchre has been the traditional site of the death, burial, and resurrection of Jesus.

Although this church was destroyed twice by conquerors, the believers rebuilt it. It is a testament to their faithfulness. Crusaders built the present church in 1066 AD.

Roman Catholics, Greek and Armenian Orthodox, Egyptian Coptics, Syriacs, and Ethiopians believe the Via Dolorosa (The Way of the Cross or Way of Suffering) passes through the Old City of Jerusalem and ends within the old Ottoman walls at this church.

Candles lit our way and incense perfumed the air as we climbed the stairs amid the crush of people inside the church. We reached the rocky outcropping venerated as the place of Jesus’ crucifixion. A chapel with a protective glass case was built over the rock. Faithful worshippers from many nations lined up to kneel inside the small opening of the glass enclosure so they could kiss or touch the rock.

Another structure preserves the second hallowed site inside the church. This is believed to be the location of Jesus’ tomb and resurrection. Here, the atmosphere was charged with emotion. Amid the throng, outcries and other expressions of worship filled the close air. Between the smoke and scent from the incense many people were overwhelmed. The chaotic tone was not conducive to personal reflection.

Travel Tips
• Most of the Church is open to the public during these hours:
Summer (April-September)
Sundays 5:00 a.m. – 8:00 p.m.
Monday-Saturday 5:00 a.m.-9:00 p.m.
Winter Hours (October-March)
Sundays 4:00 a.m.-7:00 p.m.
Monday-Saturday 4:00 a.m.-7:00 p.m.
• Check the church’s website since some chapels
may be cleared during service times listed on the website:
http://www.holysepulchre.com/visiting.htm
• Retain a good tour guide if you wish to follow the Via Dolorosa
(I found the city streets crowded and confusing)
• Go early in the day to avoid the multitude
• Easter and other Holy days are very busy
• On Fridays, worshippers carry the cross through the Via Dolorosa
• Wear non-slip comfortable walking shoes
(The ground is very uneven in the old city)
• Guard your valuables in the busy marketplace and streets
• Sandi Patti sings a beautiful rendition of the Via Dolorosa:
https://www.youtube.com/watch?v=w5fSu4a8-rE

The Church of the Holy Sepulchre is one of two places considered as possible locations for Jesus’ death, burial, and resurrection. The other is the Garden Tomb. Next week I’ll share about our trip there.

The Via Dolorosa is a narrow street that winds through a marketplace bustling with shoppers and traders hawking their wares. This route ends at the church. For many Christians traversing this traditional pathway is their most significant act during their visit to Jerusalem. Though worshippers have followed this path since the 18th Century, Jesus may never have walked this way. Still it remains a pious tradition for worshippers.

What would you most like to do if you traveled to Jerusalem?

4 thoughts on “Church of the Holy Sepulchre”