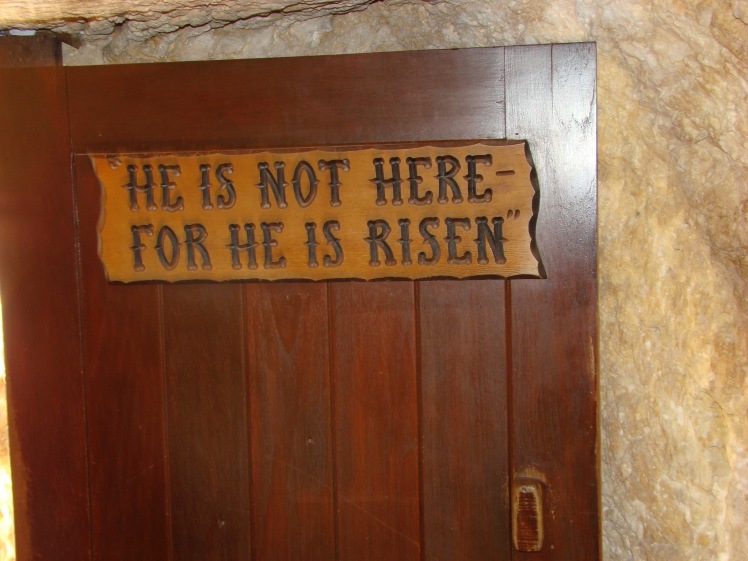 Two places are considered as possible locations for Jesus’ tomb. One is the Church of the Holy Sepulchre, the traditional site for centuries, as we discussed in last week’s post:
https://suzanklassen.com/2017/05/01/church-of-the-holy-sepulchre/
The other site is the Garden Tomb.

Approximately two hundred years ago some Christians began to look for a possible location that reflected more of the details mentioned in the Gospel accounts. Archaeological studies of the area led them to discover the Garden Tomb in 1867. It drew their attention for the following reasons:

Garden Tomb Details:
• Skull Hill or Golgotha (Aramaic for Skull) is nearby
• Located outside the walls of the Old City
• Near a gate along a major street
(Roman executions occurred beside major roads)
• A Roman spike used to seal the tomb remains embedded
in the rock face
• An ancient cistern and wine press identify site as a garden
• The tomb belonged to a rich man and was only used once
• The entrance inside the tomb is low
(Jesus’ disciples had to stoop to enter)
• A deep channel runs in front of the tomb
for a large round stone to seal the entrance
• Garden Tomb website: http://www.gardentomb.com 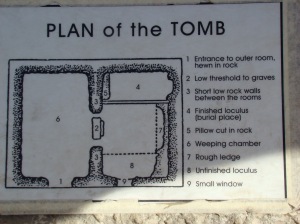 Travel Tips for The Garden Tomb:
• Open for tours and worship services:
Monday – Saturday, 8:30 a.m. – 5:30 p.m.
• Closed for Lunch during the Winter
• Groups must book their visit in advance
• Wheelchair access is good for the general tour,
but not to enter the tomb
• Wear non-slip comfortable walking shoes,
the ground is uneven

Surrounded by beautiful flowers and greenery, the Garden Tomb provides plenty of seating to enjoy quiet reflection. The Church of the Holy Sepulchre is richly ornamented inside, lighted with candles, and infused with incense.

Each location has its own unique beauty. Neither can prove beyond doubt it is the place of Jesus’ death, burial, and resurrection. However, we don’t worship the place. We worship Jesus.

3 thoughts on “The Garden Tomb”