One glimpse of those buildings tucked away from the road and I was immediately intrigued. Their architecture was obviously early (1700s) and obviously European. What in the world were they doing here in Lancaster County? The sign read, Ephrata Cloister. 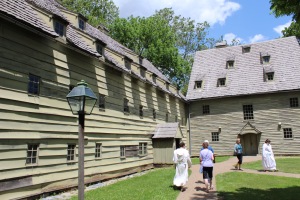 Dressed in white monastic garments similar to descriptions of those worn by original members of the cloister, our tour guides filled in many details.

Conrad Beissel, a charismatic German mystic and his followers constructed the cloister. Beissel, born in Germany, came to America in 1720.

Many Europeans seeking religious freedom in the new world were attracted to Pennsylvania. William Penn, a Quaker who also sought religious liberty, was instrumental in making Pennsylvania a free state.

From 1724-1728, Beissel was a leader of a Brethren Congregation near Lancaster. He became disillusioned with church hierarchy and worldliness. He moved away from people to be closer to God. He sought solitude at Cocalican (Indian word for low-lying swampy area with snakes). However, he was so charismatic that people followed him to this inhospitable place.

Fachwerk is the German word for the construction technique of timber and rock employed at the cloister by Beissel and his followers. The support structure is all timber. In-between it’s filled with rock, then plastered over.

The two issues most important to Beissel were keeping Saturday as the proper day for worship and forgoing earthly marriage in order to unite with God. At the height of the cloister, in 1750, there were 300 members: 80 celibate men and women, called the Solitary; 220 married members, called Householders made up the rest of the community of Ephrata. 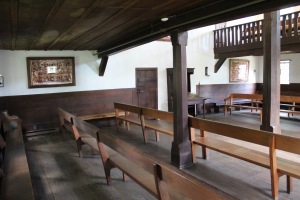 The community could not have survived without the presence and support of the Householders as they helped to sustain it and provided food. They wanted Beissel to be their spiritual leader. However, they were not interested in observing the strict rules imposed by him on the Solitary members.

Benefits of the Cloister
• Fraktur or fractured writing (Frakturschriften) is a German style of script. Many pages of the script in German were discovered all around the Cloister. These may have been poems they sang. Some were music or scripture. Some hymns were 300 verses long.
• Music – Beissel gave singing or voice lessons. Singers were instructed: No milk, eggs, or honey to eat because they corrupted the singing voice. 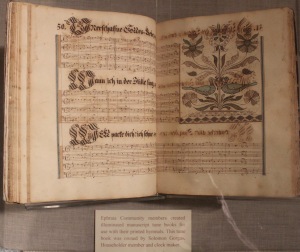 • Escape – For some of the women, the cloister allowed them to escape abusive and/or arranged marriages. Here they were free to be celibate and protected from the outside world.
• Printing – The community had the largest and earliest printing press in the United States before the American Revolution. The Brothers’ most ambitious work was the translation and publication of the 1500-page Martyrs’ Mirror for the Mennonites, the largest book printed in colonial America (German Mennonites had also settled in Pennsylvania to avoid persecution). 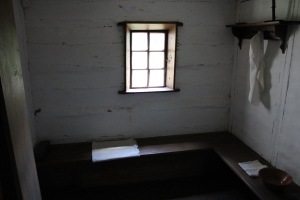 Travel Light Humor
Solitary members of the cloister slept on wooden boards. Building #16 on the self-guided tour is the Carpenter’s house. It has a pine bed if you’d like to try it for comfort.

Pillows were wood, also — a block of wood. However, you were allowed a softer variety of wood for your pillow — pine.

I guess I should stop complaining about my hotel pillow now.

How does that pine pillow sound to you? What do you think of the cloister’s rules? Tell me in the comments below.