In honor of Presidents’ Day the National Park Service at Independence National Historical Park (Philadelphia) has several activities scheduled for this weekend. One is a Gallery Tour at the 2nd Bank of the U.S. Portrait Gallery: “The Early Presidents” tour is scheduled for this Saturday, February 17, 2018. View details for it and several other calendar activities presented by the National Park Service:
https://www.nps.gov/inde/planyourvisit/calendar.htm

Much of the area near Philadelphia’s Independence Hall seemed to be one giant museum of American History. Indeed it was all part of the Independence National Historical Park. We decided to explore. 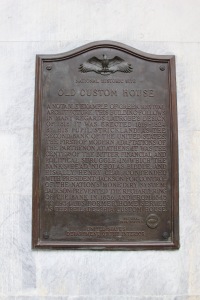 In an effort to avoid the traffic we walked through Independence Square behind Independence Hall (south side) across a narrow side street to the east where we encountered an old cobblestone road behind a very impressive building. And this was only the rear of the building.

When we reached the front we discovered this building was once the Old Custom House, but before that it was the 2nd Bank of the United States. The story behind why it is no longer the 2nd Bank would make an interesting tale given President Jackson’s fiery personality. Brief information is on this plaque.

The Old Custom House/2nd Bank is now a portrait gallery containing many of our nations early notables. It was good to put faces with all those historical names. It was also enjoyable to study their faces up close and consider their personalities. Below are just a few:

For instance, I don’t know about you, but Martha Custis Washington looks like a formidable force. Still, the artist did capture a slight twinkle in her left eye and evidence of a small smile in the upturned edge of her mouth. Her “doo” made of ribbons and such, almost looks like a crown. That seems appropriate. She did have to look official to all the foreign diplomats who visited. They were used to royalty after all.

The plain face of William Penn seems to lack any artifice. Yet he must have been quite able to handle debate and controversy with all he achieved in Pennsylvania. Founded on the principle of Religious Freedom, Penn’s Philadelphia became a symbol of political independence as well.

Benjamin Rush accomplished many things for the good of mankind. He was a good Christian and medical doctor. He practiced both well making him a man worthy of writing about. Among his accomplishments, he opposed slavery and supported one of the country’s first African American churches. While others fled during the 1793 yellow fever outbreak, Rush and many of Philadelphia’s African Americans (including minister Richard Allen—another man to write about) stayed behind to care for the dead and dying.

Based on the strength of conviction evidenced in Patrick Henry’s powerful jaw line, I don’t think it would have been easy to be on the opposite side of an argument from him. However, it was easy for me to imagine he had just finished saying, Give me liberty or give me death when this portrait was painted.

Travel Tips
• The Old Custom House (or 2nd Bank) is located on Chestnut Street between 4th & 5th Streets.
• Enter through the doors at the top of the steps (in front of the building) or through the wheelchair accessible ramp on the west side of the building.
• Admission is free.
• Through March 2018: open Saturday – Sunday, 11:00 a.m. – 5:00 p.m.
(To avoid school tour crowds visit before April)
• April 1 through May 27, 2018: Open Wednesday – Sunday, same hours.
• Check their website for summer hours and additional information:
https://www.nps.gov/inde/learn/historyculture/places-secondbank.htm

Stephen Decatur’s portrait intrigued me because of how the artist chose to represent him. Most of his face is out of focus (except for his left eye and the curl on his forehead). Now contrast that with how carefully detailed his epaulet, medal, and ruffles are.

Hmm. Exactly what was the artist implying? Are we to believe the man was only as important as his medals? Or was the artist simply more skilled at painting fabric than faces?

Sometimes I think about things too much.

So what do you think? Tell me in the comments below.