This 2,250 foot ‘Iao Needle rising above the ‘Iao Valley is one of Maui’s most iconic spots.

Clouds scuttled across the peak while we visited. I quickly snapped pictures in-between. This photo was the closest view we had at the end of the trail.

During periods of warfare, warriors used this peak as a lookout. In fact, this location is the site of a bloody battle, which occurred in 1790. One great chief, Kamehameha I, attacked the island. Maui was only one step of his plan. His goal was unification of all the islands under his control.

When you read the word: unification, translate it into conquered or slaughtered. Women and children watched as the battle raged. Although the warriors of Maui had plenty of spears, they were no match for Kamehameha’s cannon and guns. Reports of the battle indicated the rivers were clogged with the bodies of Maui’s defenders.

By 1810, Kamehameha the Great became the first king of his newly formed kingdom of Hawaii. It is said he ruled wisely.

The Polynesians, who settled Maui, brought Kalo or Taro plants with them to Hawaii. Fields of this staple crop once covered the floor of the ‘Iao Valley. 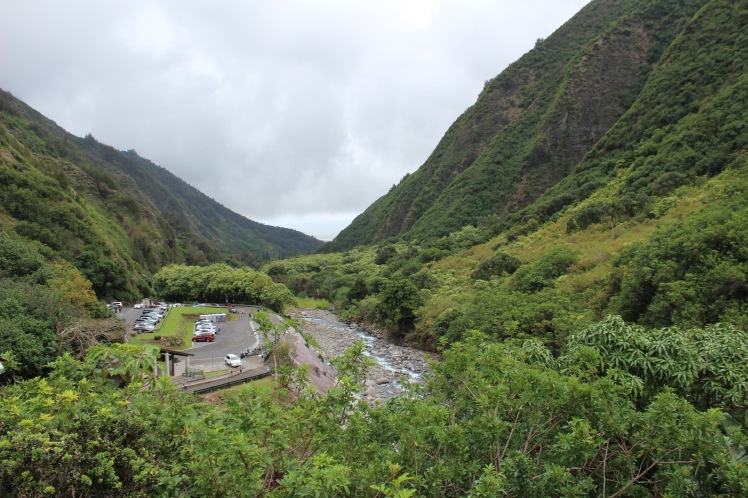 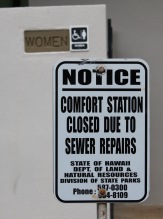 This view of the parking lot is included to show perspective of the valley with its surrounding hills. It also shows the necessary portable toilets parked there. You’ll have to utilize them instead of the Comfort Station’s restroom facilities if needed.

Our hosts indicated this sign has been displayed outside the restroom building for the past few years. Hmm. Maybe it’s not temporary. Maybe it’s a way to make people think they’re doing something when they’re actually not.

We laughed at that idea. On second thought, perhaps that’s not funny–particularly if you’re feeling desperate.

Don’t waste your time hiking up to the restroom. Instead use the portable potties before you begin your climb–because–there’s no comfort at this Comfort Station.

Travel Tips
• Climb 133 steps to the farthest point of the trail. I did not find this difficult, but I walk regularly on steep hills.
• If you are easily winded or suffer from other physical difficulties you may need to take precautions or avoid this climb.
• Stay on the trails for your safety. Although some people did descend to the streams, swimming is not recommended due to slippery rocks and fast flowing water hazards.
• Flash floods can occur without warning.
• Take time to enjoy nature like this little boy fascinated with a lizard.

When was the last time you viewed nature with the intensity of a child? Tell me in the comments below.

Until next time . . . Travel Light,
SuZan