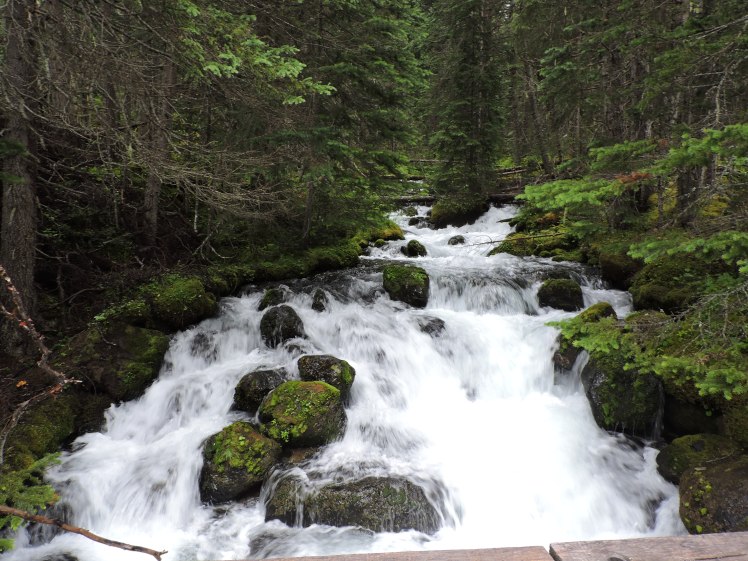 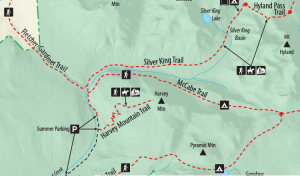 The Silver King Trail began life as a mining road. It culminates in the Silver King Basin, a beautiful sub-alpine meadow. Once it was an active mining site with a bunk house for the men. Now the bunk house has been replaced by a sturdy log cabin and the only remains of the mine is a rusty mining cart atop some equally rusty rails that dead-end in the rock filled mouth of the mine. 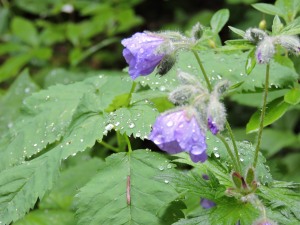 The hike up to the basin is beautiful, even when the sky is overcast and the rain is falling, as it was the day my group went up. The edges of the trail were fringed with shrubs and tall pine and spruce trees. The green was punctuated here and there with the orange and yellow of columbines and the purple of lupines and harebells.

Soon spongy, rain-soaked moss fringed the trail edges, studded by the occasional gigantic (and likely poisonous) mushroom. This gave way to a carpet of creeping dogwood, with its white star flowers.

Driftwood Creek roared next to the trail, tumbling around mossy rocks. As the trees muffled the creek’s roar the chattering of an unruly squirrel came to our ears. A flash of red and it was hidden in the lichen adorned tree branches.

Further along the trail a grouse rose up and settled on a branch, its feathers bearing an uncanny resemblance to the tree’s bark.

Almost four hours after the commencement of our hike, we emerged in the meadows of Silver King Basin. A mist hung in the air, obscuring the tops of the craggy mountains that rose above us.

Directly in front of us was the Joe L’Orsa Cabin built and maintained by the Babine Mountains Provincial Park. The outhouse and woodpile were off to the side. 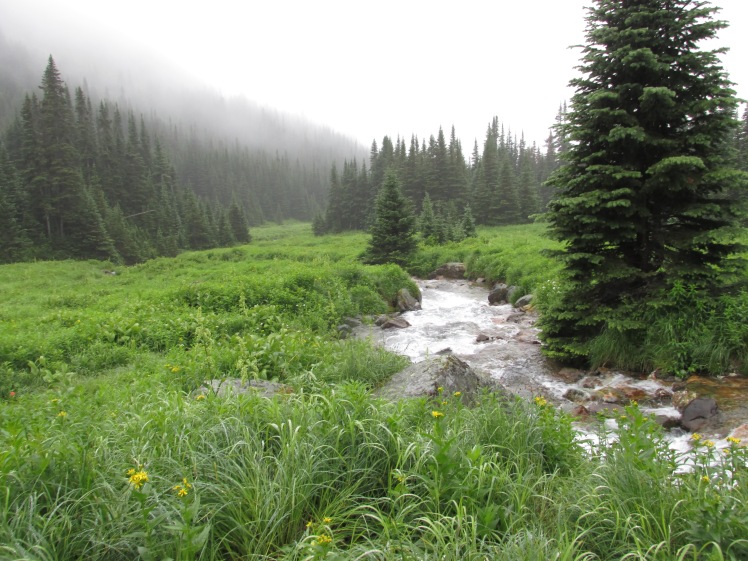 Inside the two-story log cabin was a large room with a wood stove, picnic table, and steel counter. Off this main room was a bedroom with plank bunk beds. Up the stairs were two more bedrooms. The cabin can house twenty people and does so on a first-come, first-serve basis. Soon the cabin was warm and cozy, a nice contrast to the drizzle outside. After our picnic lunch we went exploring.

Past the cabin was the sub-alpine meadow dotted with red paintbrush, purple lupine and other wildflowers. Driftwood Creek meandered across, banks edged with moss and flowers.

We looked at the old mining cart and the low, dark hole in the earth that had been the mine. It was time to head home. The 9 km hike (now mostly downhill) took only two and a half hours.

* * *
Jessica, thank you so much for the hike on the Silver King Trail.

Downhill does always seem to be faster. Interesting how gravity helps with that. Feel free to tell Jessica and me about your favorite hikes in the comments below.